As part of the UKVAC or United Kingdom Visual Analytics Consortium, Middlesex University is hosting VASS 2010, the Visual Analytics Summer School (camp) at their Hendon campus in London. This residential event is sponsored by the US Department of Homeland Security via the US National Visualization and Analytics Centre (NVAC) and is organised in collaboration with the UK Home Office and Ministry of Defence.

The scenario was to create a design of a mockup for a visual analytics system interface that will allow a user to visualize the stress levels of individuals. At the end of the exercise the groups were asked to present their final proposed design, and discuss how they achieved that goal. The summer school participants were split into small groups of about 5 people each, and given about two hours to create the designs using the FdS methodology. A presentation of the FdS was given to the students before they started on the exercise. Also, expert advisers were on hand to help them with the challenge scenario, and also with the process of the FdS. 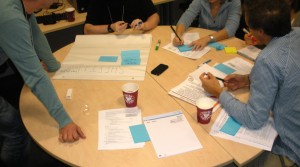 Many of the student groups focused on the time nature of the problem, and started to consider time based visualization designs. 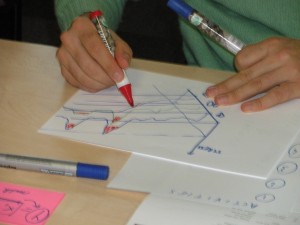 While other groups started to think of diary based views that could display the data over a day period. 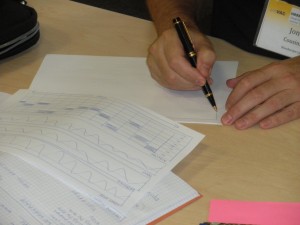 One of the interesting aspects is that most groups split the work into separate tasks, with some members of the team using the internet to discover different solutions, while other members of the team brainstormed different keywords. The teams also considered the Operations, with one team using the visualizer to display and actively mimic the interactions that their tool could have. 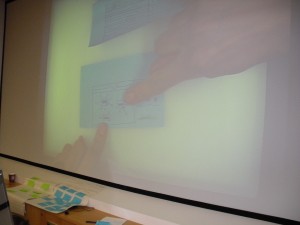 Finally groups made presentations of their designs, and committed their designs to the FdS sheets. They used large sheets of A2 paper to present their results to the whole summer school participants. 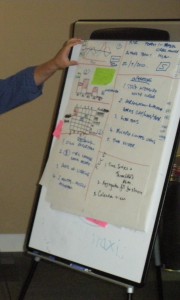